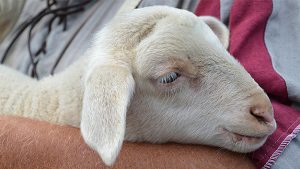 Yeshua (Jesus) made His triumphal entry into Jerusalem on the Hebrew date Nisan 10, which begins at sundown Tuesday. Moses instructed Israelites in Egypt to take an unblemished lamb into their homes on Nisan 10 to prepare for the first Passover. The lamb was slaughtered on Nisan 14. The four days gave family members time to grow attached to the animal and impress upon them the costly nature of the sacrifice – innocent blood shed for them.

Likewise, Jews had four days to grow attached to Yeshua, the Lamb of God, before His crucifixion on Nisan 14. Many did, including children who cried out in the temple courts, “Hosanna to the Son of David!” Son of David is a Messianic title. When the chief priests and scribes complained to Yeshua over the uproar, He answered, “Have you never read, ‘Out of the mouth of infants and nursing babies You have prepared praise for Yourself?’ ”

The four days also gave priests time to inspect the sacrificial lambs for blemishes or defects. None were found in the Son of Man, who was sentenced to death in a kangaroo court. Yeshua was crucified the same hour priests were sacrificing Passover lambs. His last words on the cross – “It is finished!” – corresponds closely with the last verse of Psalm 22, a Messianic passage: “He has done it.” God’s plan of redemption was now complete. Yeshua was resurrected on Nisan 17.

Did God forsake Jesus at the cross?
Trustworthy