Yeshua (Jesus) of Nazareth was crucified on the Mount of Olives at the very hour priests were slaughtering Passover lambs at the Jerusalem Temple. In preparation for the first Passover in Egypt, God tells Moses that the blood of sacrificial lambs, to be shed on 14 Nisan, “shall be a sign for you on the houses where you are (Exodus 12:13).”

The Hebrew word for sign, ‘owth, also can mean a signal, beacon or mark. What was God trying to signal at Passover? We find out when we look at the Hebrew pictographic text that was used in Moses’ day: 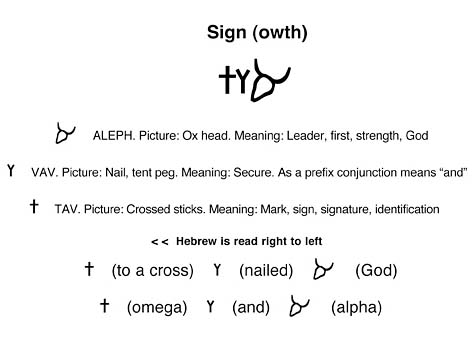 God’s Passover sign points to the sacrificial death of His Son as well as His divinity, reflected in the pictograph examples above. Yeshua identifies Himself in Rev. 22-13 as the Aleph and Tav, the first and last letters of the Hebrew alphabet (translated Alpha and Omega in Greek). Vav frequently is used as a prefix to words to mean “and” in the sense of adding things together, according to Bible researcher Jeff Benner. The picture: Messiah is the beginning and the end. The Vav symbol, which resembles a nail, has the numerical value of six, the number of man. Man drove the nail into Yeshua’s hands.

A better way
One Way