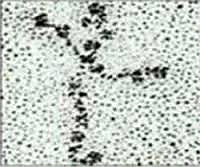 The last letter of the Hebrew alphabet is tav, which resembles two crossed sticks or a cross in ancient pictographic scripts. The letter, which can tilt right or left, represents a mark, sign or signature. In Ezekiel 9:4 God puts a mark – the letter tav – on the foreheads of faithful Jews, sparing them judgment.

It appears God also embedded His signature, the letter tav, in His creation. The protein molecule that holds us together, laminin, is shaped like a tav. The cross points to the creator of laminin, Yeshua (Jesus), the Aleph and Tav (Revelation 22:13). Colossians 1:16-17 says all things were created through Yeshua, and in Him all things consist. 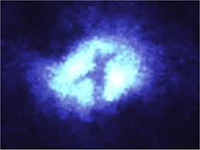 Another example appears in the Whirlpool spiral galaxy, 31 million light years from Earth. A tav symbol, formed by dust rings, marks the location of a massive black hole. This photo, captured by the Hubble Space Telescope, was released in 1992 and published in Time magazine. The galaxy lies perpendicular to earth and offers an unobstructed view of its bright core. In other words, God didn’t hide this celestial sign that points to a cross.