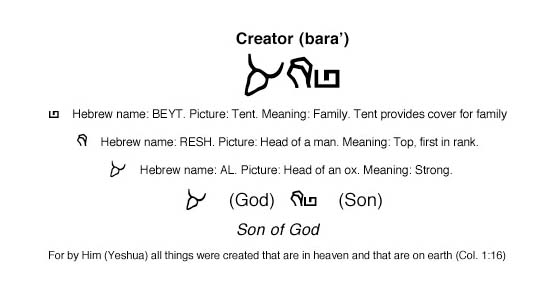 When verbal communication is not received or understood, the exasperated speaker might use the expression, “Do I have to draw you a picture?” God drew the ancient Israelites pictures to help them understand His Word. He introduced a 22-letter alphabet in pictographic script, using letter symbols or word pictures that a Semitic, tent-dwelling society would recognize.

God used this ancient script to point to Messiah. The Hebrew word for “creator,” bara,’ consists of three Hebrew letters – BEYT, RESH and AL (see diagram above). Hebrew is read right to left. The combined letters BEYT and RESH form the word “ben” when used in the possessive, meaning “son.” The symbol for the Hebrew letter AL is an ox head, meaning chief, leader or father. According to Hebrew researcher Jeff Benner, the ox head can represent “El” or “God.” Combined, the letters identify the Son of God, Yeshua (Jesus) of Nazareth, as Creator of heaven and earth. That claim is supported in Colossians 1:16.

NOTE – The Hebrew alphabet evolved and pictographs became a lost language. But the ancient script is being revisited today by a few Hebrew scholars, including Benner. The goal is to translate and understand the Hebrew Scriptures more accurately. Without understanding the near-eastern mindset of the people who penned God’s Word, the Tanach (Old Testament) can get lost in translation.

Good will toward men
Passover fulfilled